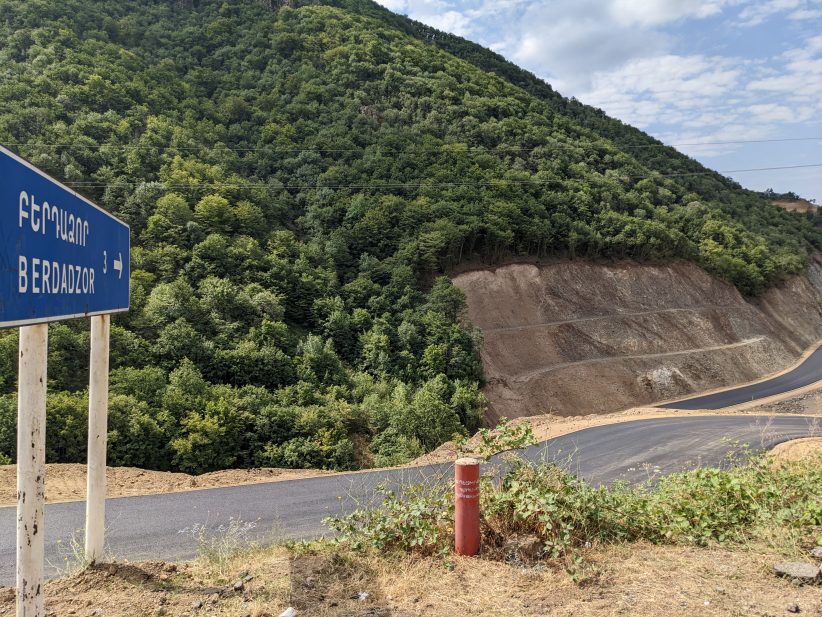 Azerbaijan is building its section of the new road in Karabakh well ahead of schedule (CivilNet/Karen Harutyunyan).

Azerbaijan has called on Armenia to begin using a new road to Karabakh — sections of which remain under construction or unbuilt — according to a statement published Tuesday by Karabakh President Arayik Harutyunyan’s office.

“The Azerbaijani side, via the (Russian) peacekeeping contingent stationed in Artsakh, submitted a demand regarding organizing traffic on the new route in the near future,” Harutyunyan’s office said.

The statement added that “the steps to be taken in the current situation were discussed” at a special meeting of the Karabakh Security Council that Harutyunyan convened Tuesday, “including guaranteeing safe passage via the Russian peacekeeping contingent.”

It did not specify what exactly those steps may entail, or when exactly Azerbaijan expects Armenia to begin using the new road.

The Azerbaijani government has so far not commented publicly on the matter.

The road in question refers to an alternative route to the vital Lachin corridor, a strip of land surrounding a road controlled by Russian peacekeepers that runs between Armenia and the part of Karabakh that remains under Armenian control. As a result of Azerbaijan’s territorial gains in the 2020 war, it became the only overland connection between Armenia and Karabakh.

The ceasefire that ended the war says a new road should be built that also connects Armenia and Karabakh, while bypassing the town of Berdzor, also known as Lachin, as well as several villages that lie along the Lachin corridor. Once the alternative route is completed, Azerbaijan is meant to take control of the old road, and Russian peacekeepers are supposed to relocate to the new road.

The ceasefire calls for “a plan for the construction” of the new road to “be determined within the next three years,” without specifying which side should take on the responsibility and cost of building it.

Baku has already taken the lead on the project, with Azerbaijani construction crews reportedly already having finished building nearly the entire section of the route that lies in Karabakh. In sharp contrast, Yerevan announced plans to start building the section that lies within Armenia only last week.

It remains unclear how traffic could pass along an unfinished road.

It also remains unclear what would happen to a number of crucial pieces of infrastructure located within the Lachin corridor should Azerbaijan take control of the area. They include a high-voltage electrical line, gas pipeline, and internet cable, all running from Armenia to Karabakh.

Earlier this year, Karabakh residents suffered two separate natural gas outages during unseasonably cold weather. The authorities in Karabakh blamed the gas cuts on Azerbaijani troops, whom they accused of blocking a pipeline running from Armenia. Baku did not comment.

Baku’s apparent request that Yerevan begin using the new route comes just one day after units of the Artsakh Defense Army reportedly thwarted a major incursion attempt by Azerbaijani forces into Karabakh at multiple points along the line of contact. One Armenian soldier sustained non-life-threatening injuries.

Monday’s escalation prompted a flurry of diplomatic activity in the region, most notably a phone call Tuesday between Armenian Prime Minister Nikol Pashinyan and Russian President Vladimir Putin. Tuesday also saw calls between the Armenian and Russian foreign ministers and between the Azerbaijani and Russian defense ministers.

On Monday, U.S. Assistant Secretary of State Karen Donfried, who oversees the State Department’s Europe and Eurasia bureau, made separate phone calls to the Armenian and Azerbaijani foreign ministers.

Read-outs of those conversations were brief and did not go into any significant detail.

Tigran Grigoryan and Benyamin Poghosyan, both CivilNet contributors and political analysts, said they believed the escalation in Karabakh was an attempt by Baku to pressure Yerevan into accepting its maximalist negotiating position in ongoing normalization efforts.

“From my perspective, the main reason behind yesterday’s Azerbaijani actions was from frustration in the Armenia-Azerbaijan negotiations. Probably Armenia did not accept or did reject some demand from Azerbaijan,” Poghosyan told CivilNet, echoing Grigoryan’s thoughts.

While Grigoryan and Poghosyan stressed that the Russian troops stationed in Karabakh should be a strong enough deterrent to prevent yet another full-scale war between Armenia and Azerbaijan, both warned that Karabakh would, in all likelihood, see another bout of ethnic cleansing should Azerbaijan take total control of the region.