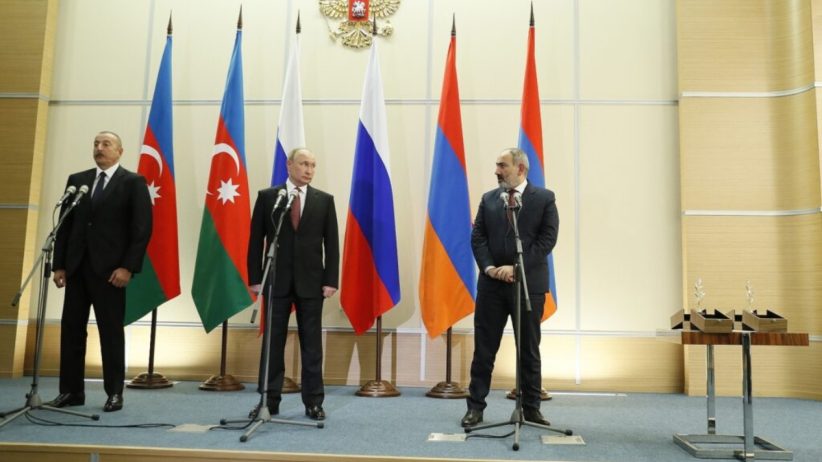 “Such talks may take place in the last days of October, with Moscow and Sochi being considered the main places to hold talks,” Vedomosti reported late Sunday evening. “‘Most likely, Sochi will be chosen,’” a source told the paper.

As of late Monday morning, neither Armenia’s Foreign Ministry nor Azerbaijan’s has commented publicly on Vedomosti’s reporting.

A separate source said to Vedomosti that Russia began working to organize the meeting with Pashinyan and Aliyev at a summit of post-Soviet countries in Kazakhstan earlier this month.

At the summit, Putin extended an invitation to Pashinyan and Aliyev for another round of talks “in Russia in any place at any time, in Sochi, in Petersburg, in Moscow.”

Meanwhile, the foreign ministers of Armenia, Azerbaijan, and Russia held talks on the sidelines of the summit, where they reaffirmed their commitment to implementing three earlier statements issued jointly by the countries’ leaders.

The first two statements established a ceasefire in and around Karabakh and formed a joint working group to reopen regional transit routes. The third statement reaffirmed the parties’ commitment to the first two.

This all comes as Moscow appears to be seeking to reassert its role in mediating between Yerevan and Baku, amid deepening diplomatic engagement in the conflict by Brussels, Paris, and Washington.

Earlier this month, French President Emmanuel Macron accused Russia of taking steps to purposefully “destabilize” the South Caucasus in an interview with French television, prompting Putin to hit back that Macron has “no understanding of the course of the conflict” between Armenia and Azerbaijan.

Moscow has also responded with indignation to Brussels’ decision to dispatch a civilian monitoring mission to the Armenia side of the border with Azerbaijan, with a spokesperson for Russia’s Foreign Ministry accusing the European Union of attempting “to oust our country’s (Russia’s) mediation efforts.”

Armen Grigoryan, the influential head of Armenia’s Security Council, said in an interview with Armenian television earlier this month that Armenia expects to sign both a peace treaty and a separate border delimitation deal with Azerbaijan by the end of the year.

Armenia-Azerbaijan border commission to meet in Brussels next month