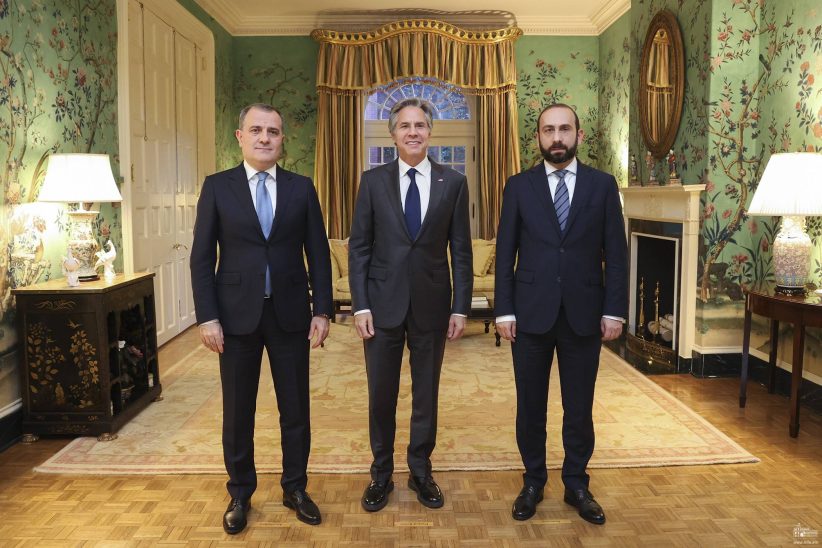 U.S. Secretary of State Antony Blinken held talks in Washington Monday with the foreign ministers of Armenia and Azerbaijan, saying he welcomes the two countries’ “courageous steps” toward peace and calling for direct negotiations.

“What we are seeing now are real steps, and courageous steps, by both countries to put the past behind and to work toward a durable peace,” Blinken said in opening remarks. “I applaud both of you and your governments for the courage and determination that you’re showing.”

“Direct dialogue is the best way to a truly durable peace, and we are very pleased to support that,” he added.

Following the talks, held at Washington’s initiative, Yerevan and Baku released identical readouts, agreeing to “expedite their negotiations and organize another meeting in the coming weeks,” while acknowledging that “there is a range of issues that still needs to be addressed.”

Karabakh, the region at the heart of the many disputes between Armenia and Azerbaijan, was not mentioned in either Blinken’s opening remarks or in the two countries’ readout of the talks.

Monday’s meeting “was less about peace negotiations in the full sense of the term, and more about providing an opportunity for the warring parties to meet and talk,” Agence France-Presse reported, citing a U.S. official speaking on condition of anonymity.

It was Blinken’s third round of talks with the foreign ministers since Azerbaijan launched an unprecedented attack on three dozen Armenian municipalities in September, marking the worst outbreak of hostilities in the region since the Karabakh war two years ago.

Blinken held talks with Armenia’s Ararat Mirzoyan and Azerbaijan’s Jeyhun Bayramov in New York City just days after a fragile ceasefire came into effect to end the fighting, becoming the first foreign official to broker talks between the two countries after the clashes.

That was followed up by a three-way phone call last month, also held at Washington’s initiative.

Following each of those rounds of talks, Yerevan and Baku released notably differing statements, making their adoption of identical readouts of Monday’s meeting all the more striking.

The meeting in Washington comes on the heels of two major summits last month that brought together the leaders of Armenia and Azerbaijan for peace talks.

That statement also failed to mention Karabakh by name, referring to it only as the “deployment zone” of Russian peacekeepers stationed there.

Edmon Marukyan, Armenia’s ambassador-at-large, told CivilNet that Armenia’s negotiating team in Sochi “insisted to the very end to include a formulation about Nagorno-Karabakh” in the statement, “but it was not included because Azerbaijan did not agree to it.”

Despite Karabakh not appearing by name in the statement, “30 percent or more” of the talks in Sochi were dedicated to the issue, Marukyan said.

Weeks earlier, Pashinyan and Aliyev met for negotiations in Prague, where they reportedly came to a deal to recognize the other country’s territorial integrity. They also agreed to allow the European Union to temporarily deploy a civilian monitoring mission to the Armenia side of the border with Azerbaijan.

Karabakh was not mentioned in a joint statement issued after those talks either.

Yerevan says it hopes to sign both a peace treaty and a separate border delimitation deal with Baku by the end of the year.

Azerbaijan’s September attack on Armenia seems to have moved the European Union and the United States to deepen their diplomatic engagement in the region, while prompting Russia to try to reassert its role after months of appearing preoccupied by its full-scale war against Ukraine.

In recent weeks, Russia has repeatedly accused outside powers of attempting to meddle in the South Caucasus and “oust” Russia, the region’s traditional security guarantor — charges that Brussels and Washington have dismissed.