The Investigating Committee has updated the information about the bus explosion that took place on the evening of April 25 on Halebyan street.

At the time of the explosion, there were 10 people on the bus, 1 driver and 9 passengers, 2 of which died at the spot, and the rest suffered injuries of various degrees. All the injured are in a stable condition.

The Investigators reported following an examination of the scene, a telephone SIM Card was found. In cooperation with the National Security Service, it was revealed that the owner of the card was a twice-convicted citizen of the Republic of Armenia, who has become one of the victims of the blast. A search of the found SIM card owner’s home took place prescribed by law on April 26 that led to the founding of TNT materials,  explosive devices, and other types of devices.

Similar house searches were also conducted in the homes of everyone who was on the bus. 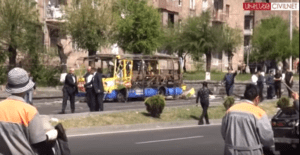 “Traces of TNT have been detected on samples taken from the scene of the explosion, which confirmed the results of the preliminary examination. Nine of the ten people in the bus, including the driver, the seven injured passengers and one victim, have been identified. All of them are citizens of the Republic of Armenia.” On the night of April 26, in order to further continue with the investigation, the apartments of all of them were searched. This search resulted in no items of interest for the criminal case, so therefore their involvement in the explosion was rejected,” said the Investigative Committee in a statement.

The National Security Services along with the Investigative Committee have tied the SIM Card to the dead body that was recognizable. The second victim of the blast is yet to be identified. The body is unrecognizable, and DNA test is needed.

Possible video recording spots along the route of bus 63 will be confiscated and examined for further research.

The Armenian Prosecutor General’s Office released a statement ruling out the possibility that the explosion in a bus was caused by a terrorist attack. “The initial investigation has not revealed any facts that would support the explosion as acts of terrorism,” reads the statement.

Regarding the incident, The U.S. Embassy in Armenia offers its sincere condolences to the families of those killed in last night’s tragic bus explosion. The injured remain in our thoughts as they recover. We stand ready to offer whatever assistance we can to help the Armenian authorities investigate this incident. We praise the police for their calm, professional investigation.